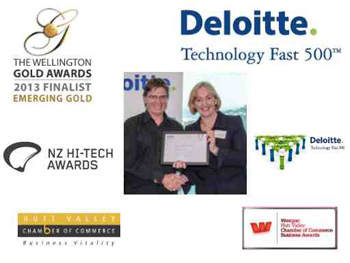 After being awarded the prestigious Westpac Hutt Valley Chamber of Commerce Business Award in Innovation in 2012, Times-7 is delighted to have participated in a number of awards events recently. These include, The Wellington Gold Awards, The NZ Hi-Tech Awards, and from one of the largest professional service network award indices in the world, the Deloitte Asia Pacific Technology Fast 500.

A winner for the third time in three years in the Technology Fast 500, Times-7 has improved it’s ranking by over 20 places from #229 to #207 and was one of just 46 New Zealand companies making the index.

At a Deloitte awards ceremony in Wellington attended by Amy Adams, New Zealand Government Minister for Communications and Information Technology, Times-7 CEO Antony Dixon said, “An independent benchmark is a great motivator for the team, and we’re again delighted to be acknowledged in the Technology Fast 500..”

Times-7 is thrilled to be recognised by these awards, and further nominations are already in the pipeline, including the Westpac Hutt Valley Chamber of Commerce Business Awards and the Deloitte Asia Pacific Technology Fast 500 award for 2013.